This column appeared in the AUG/SEPT 2005 issue of what was then called Canadian Hot Rods & Classics magazine. It was just the second issue published.

Four days before this magazine debuted at the Qualicum Beach Father’s Day show ’n shine, I received a call that my mom, Betty Denomme, had received her last rites and  that I better get home to Kitchener, ON if I could. I was in Kitchener that night by 11 p.m. eastern time. Struggling with breathing problems that were eventually linked to lung cancer, mom held on and when my brother and I arrived at her hospital bedside the first thing she did was apologize for making me miss the magazine’s big debut. I told her not to to be silly and in the next couple of days she recovered to the point I felt it would be OK to come home,
deal with the magazine’s debut and return later in the month to spend more time with her.

It was time I didn’t get. On my way home from a show in Edmonton June 27, I received news that mom had passed away at the age of 63. I returned home to Kitchener, ON, and spent the next week saying goodbye to my mom.
The morning before I left to return to Nanaimo, the family spent time going through mom’s photo albums, rediscovering old memories and discovering photo’s we’d never seen. Most gearheads get the car crazy disease honestly from their father, and that’s mostly true for me.

But as I flipped through the pages of the old photo albums I was reminded that behind every gearhead is a very understanding spouse or, if you’re really lucky, a spouse who shares your passion. (You lucky bastards.)
Though my parents split up in the mid-1980s, these pictures discovered in my mom’s closet prove it wasn’t a passion for cars that came between them. In each photo of mom with a car, she’s smiling. I guess it makes sense now that her 1979 green Oldsmobile Ninety Eight had Keystone Classics and a 403 (6.6 litre) under the hood. The most boring car she owned was her last one, a 2000 Hyundai. It replaced a much sportier, but very rusty, 1989 Cavalier RS. I remember going with her in the winter of 1989 to Stedelbauer Chev-Olds-Cadillac on Ottawa St. in Kitchener and trying to convince her to upgrade to the Z24. Though clearly tempted, she was too budget conscious to be swayed, but it was fun trying.

Finding the time slip from St. Thomas Dragway that immortalized mom’s first pass down the 1/4 mile shouldn’t have surprised me as much as it did. Throughout the 1960s and early 1970s she must have been to dozens and dozens of races with my dad. It
makes sense she would get behind the wheel at least once. The time of 77.51 at 17.54 indicates she probably wasn’t driving the 1957 Ford Sedan Delivery she’s standing beside in the photo with this column.

I have two memories of her when it comes to dad’s drag racing days. One is quite vague. We’re sitting in the stands at a dragstrip waiting for my dad’s turn to come. “Here he comes,” she’s saying. “Here’s dad.” He was driving a Ford Country Squire station wagon and I remember it had Cragar SS wheels. Many year later I learned it had a 390 and served as the vehicle that helped wean dad from his quartermile habit while simultaneously dealing with his growing brood. The other memory is of her riding as a passenger in the ’57 Ford while it was strapped to the flatdeck of a a red, one-ton Ford dad used as a car hauler. There was only enough room in the cab of the truck for dad, my two sisters and me. Mom was content to sit in the race car, smoking and reading a book.

Mom always wanted a 1955-57 Thunderbird and I would tell her that when I struck it rich it would be the first
thing I’d buy for her. The closet I ever got was buying her a cheap stone rendering of a ’56 T-Bird. I don’t even remember when I bought it or where I bought it, but when we were cleaning up mom’s stuff, it was one of the first things I set aside for myself. Mom may not have been car crazy, but I think she appreciated cars enough to understand and tolerate the disease that afflicted her husband and first son.

I hope heaven has a highway and that mom’s finally behind the wheel of a baby blue ’57 T-Bird. But it better have a little something extra under the hood. A 17-second ride isn’t going to cut it when I get my calling from the gearhead gods. If dreams do come true in heaven, my dual quad, 409 ’62 Bel Air will blow the doors off your T-Bird. Sorry, mom. It’s always about the horsepower.
I know you understand.

Funny thing about the past is that you don’t always remember it the way it really was. Below is another picture I found in my mom’s photo albums. Mainly, it’s a shot of my sisters, Connie, left, and Rhonda, on Connie’s First Communion day. But in the background is the only existing photo I have of my dad’s 1958 Ford Ranchero. You might remember I was under the mistaken impression dad owned a ’57 Ranchero. Obviously, photos don’t lie. Thanks mom for setting me straight. Dad tells me this car has since resurfaced in Kitchener and is currently being restored. If I can get updates, I’ll let you 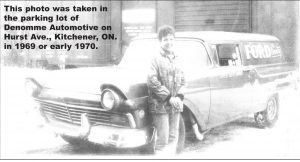 know how it turns out.

2 thoughts on “REMEMBERING MY MOM”